Tackawel and Issibit – A Wild Harvest to Fill Empty Bellies 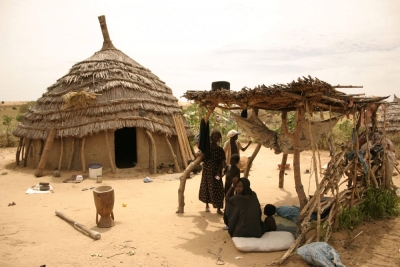 I arrived as the sun was setting in the sedentary Tuareg village of Intatolen, once the men and women had returned from planting millet in the fields. Wanting to meet my hosts, I walked around the tiny 5 household village greeting the women.  Two women sitting beside their thatched hut eating waved me over, “bismillah” – welcome – to join them.  They handed me a wooden decorated spoon, as I sat down to enthusiastically eat a very well prepared meal of a grain I didn’t recognize with wild squash.  After several minutes of silence, I introduced myself, and asked them their names.  They giggled.  I had committed “senti” – speaking while eating.  While speaking during a meal is overtly shunned in Tuareg tradition, it is covertly appreciated as a sign that the food was so good to have made your mind wander towards better things.

After dinner, the women introduced themselves as co-wives, Issibit and Tackawel. Issibit, the elder of the two, apologized profusely: “we would have liked to serve you meat, but all our animals have died. 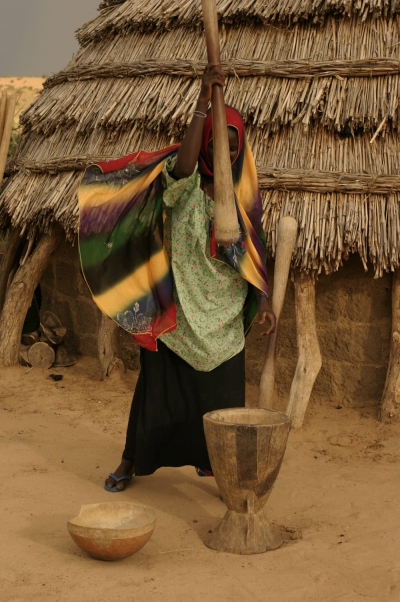 We ran out of rice a few weeks ago, and so now we are eating wild grains until they too run out.  And the lacada – we are VERY embarrassed to have served you the wild zucchini, but we have nothing else to eat”. I reassured Issibit that the meal was delicious, while explaining that the zucchini is “good for the body” and that it is one of my preferred vegetables to eat it in my home country.  I even suggested that they might consider eating it whenever it is available, even outside of times of famine, to “make them strong”.  She smiled, although I could tell she only felt slightly less embarrassed.

I was later told that eating wild grains and vegetables is one of the most telling signs of famine because they are only eaten when every other food source has run out. Several months later when I analyzed my Fulbright research data, I discovered that 71% of the households that I interviewed went from eating one to two meals a day supplemented with milk, to one or no meals a day only sometimes supplemented with a greatly reduced quantity of milk.

Furthermore, during this period 91% reported resorting to eating wild grains, squash, and bitter berries.  Thinking back to my encounter with Tackawel and Issibit, I was once again reminded of the generosity of these people that share everything, until there is nothing left.

Issibit, the elder of the two, apologized profusely: “we would have liked to serve you meat, but all our animals have died.

Thinking back to my encounter with Tackawel and Issibit, I was once again reminded of the generosity of these people that share everything, until there is nothing left.