Amman Imman, Arr Issudar (Water is Life, Milk is Hope) is a well known saying among the Tuareg people.  In the Azawak of Niger — a region the size of Florida and home to half a million people — the value of water can be felt on a daily basis.  Potable drinking water is for all intent and purposes unavailable.

The Azawak gravely suffers from persistent desertification and poor annual rainfall rarely exceeding 200 to 400 millimeters a year. Global climate change is having a drastic effect on the rainy season. The plains were once considered the best pasture land in all of West Africa. 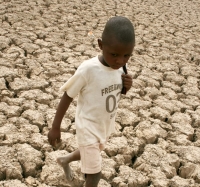 Over the span of 25 years, the rains have dwindled from lasting 5 months a year to less that one or two months today.  In the Azawak, survival is largely determined by the climate.

In the Azawak, survival is largely determined by the climate.